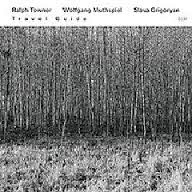 Ralph Towner is a guitarist that exemplifies Ellington's idea of music "beyond category". For years he has refused to be stereotyped as only a modern jazz, new classical or fusion artist, but instead has directed his full, exceptionally talented self to wherever his music takes him.

There are five compositions by Towner and five by Muthspiel on the album. All have something of that open-spaced sound that Towner often favors and, as it turns out, the other two also feel comfortable within.

This is considerably lyrical music. Not surprising if you know Towner's work but equally so of the other two. The guitar playing mixes improvisation (of the exceptional sort) with compositional works that stand out.

It should be heard by you if a jazz-classical nexus in guitar artistry floats your boat. If you don't know what that means, then listen anyway and I think you will be transported.