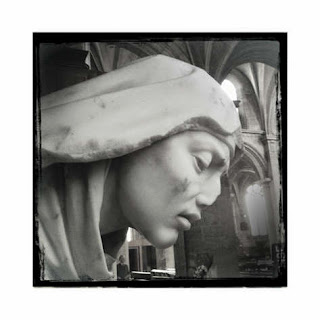 Benjamin Duboc has been a centerpiece bassist on the free jazz scene in Europe for some time now. He has been an important player but until now you never got quite the up-close-and-personal view of his bass playing. All that changes with a welcome solo bass release St. James Infirmary (Improvising Beings 22).

This is good news. (And it's also good news that the Improvising Beings label will be continuing its series of releases after all.)

It's Benjamin Duboc, his bass, the microphones and that's all. And that's all you need. He features a long improvisation based on the classic "St. James Infirmary" to start things off and it is an inspired idea. He sets out the theme and works his way around the implications and improvisations that suggest themselves to him. At times there's that deep woodiness and hard arpeggiated-or-otherwise double stops Charlie Haden first gave to us now rather long ago. But it works for Maestro Duboc as a springboard into his own territory.

The second part of this solo album features bowing, harmonics and a full universe of extended sounds for bass. It nicely complements the first part, taking us from the rooted, soulful elemental expressions to the stratospheric. They balance each other out perfectly well.

In all you get Duboc the thoughtful, full-toned, fully creative bass master at work, neither "standing pat" as the St. James lyrics would have it, nor operating in an ambiguously irresolute zone. Benjamin Duboc knew where he wanted to be in this solo recital and he went there, freely and rather brilliantly.

One of the best bass solo albums to come out this century so far, no doubt about it!