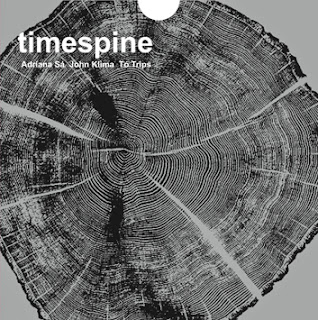 More music of adventure from Portugal today, namely Timespine (shhpuma 008CD), a trio of Adriana Sa on bowed, bottlenecked and plucked zither and sampler, john Klima on bass, and To Trips on dobro guitar and percussion.

The music is open-form avant freedom, improvisations that have a sort of arpeggiated drone feel, of ritual, music for some unknown temple rite. It is uncanny how zither and dobro create a musical miasma of sustained pivots around a key center while the electric bass comments alongside.

Alan Sondheim's early NY ventures on ESP in the '60s are the closest I can come to a parallel. But even then this set strives for more of a singularity in instrumental ambiance where Sondheim explored multiple sound universes. There are sections where the interplay is less drone-like and more pointed, almost like classical Chinese, Korean or Japanese small ensemble string music, but not quite.

It's one of those musical presentations that takes a few listens to appreciate. There is too much new to take it in on one hearing. But then you get it. Or I did, anyway.

This is not going to go metal on you or take a form you will readily recognize. But it is different in ways that convince. So if you have a mind for difference, this will satisfy you.