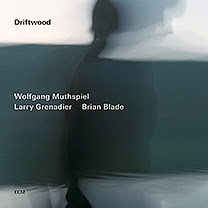 The artistry of Austrian guitarist Wolfgang Muthspiel is unparalleled. We've come across him here before (look him up in the search box). For his ECM debut as a leader he gathers an excellent trio and they let loose with a weighted, considered form of subtle excellence. Driftwood (ECM B0020543-02) is the result.

This trio covers a lot of ground. Muthspiel plays classical acoustic and electric guitar. His sound is extended and made a part of a whole with the very on bass playing of Larry Grenadier and the inside-outside subtle motion of drummer Brian Blade.

With the exception of the title cut, which is a group composition, these are all Muthspiel's pieces. They envelope the band inside their gently insistent demands and the band in turn forms a freely opening force field around the pieces. There are moments of jazz-rock incandescence where Muthspiel lets loose; there are other moments of introspective beauty where Muthspiel and Grenadier elaborate around a feel and melodic inventiveness.

It's one of those albums you must hear several times to catch all the nuances. It can easily be played in the background but that's not what it is meant for. There is much musicality to hear.

Wolfgang Muthspiel is a post-Towner wizard on the classical and the electric. He has ideal bandmates in Grenadier and Blade. This is a guitarist you would be happy to wake up one morning and find you have become. The second best thing is to revel in this recording. It is unmistakably worthwhile on all levels.