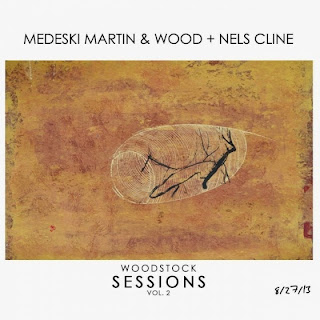 Medeski, Martin and Wood, like guitarist Nels Cline, are never predictable. Both are known for popular endeavors, Cline as a member of the jamband Wilco, Medeski, Martin and Wood as purveyors of progressive funk. But all of them have been known to take some walks on the wild side in more avant-leaning sessions.

That is the happy case on their Woodstock Sessions, Vol. 2, which was captured last summer in front of a live audience at Applestock Studios in Woodstock. After some time playing the role of Larry Young in a celebrated Tony Williams Lifetime tribute band that included Jack Bruce, Medeski must have been in the mood to take it out.

And all four seem up for it. They are in a free-psychedelic mood on this date and they go to some very adventuresome places that seem organically together as well as a bit experimental.

Cline sounds great as an integral part of the session, certainly more integrated into the band than a guest artist might typically be. All four run the gamut here and create a music that continues in a free jazz-rock zone that doesn't often get a hearing nowadays.

The music burns, flies and orbits space with a clear sense of direction--yet very much in the avant zone.