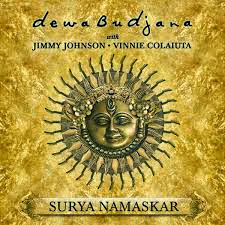 Indonesian guitarist Dewa Budjana is a heavy. He's been doing some good things on MoonJune Records. His latest finds him coming at us definitive-style. Surya Namaskar (MoonJune 063) puts Dewa in the company of two major fusion players. If you know Holdsworth, Zappa, etc., you'll no doubt know the excellent work of Jimmy Johnson on bass and Vinnie Colaiuta on drums. They join Dewa on this outing and that really gets the music charged and electrically vibrant. Both contribute much and give Dewa a backdrop that sets him afire.

Dewa plays some extraordinary solos here--with speed, smarts and originality. These are Dewa compositions and they pop! Gary Husband joins them on keys for the first cut, and there are a few other guests who make excellent contributions. The trio ultimately set up and sustain the album though, as you might expect.

You want something new and hot in the fusion zone, get this one. It rocks!