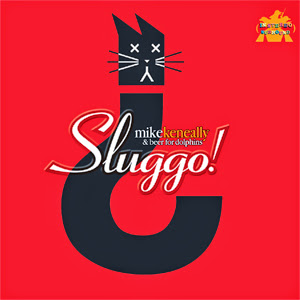 Sometimes you miss something so wholly that when you finally get to it there is a feeling of shock. That has been the case for me with master guitarist, keyboardist, composer Mike Keneally and his album Sluggo! (Exuwax, special 1 CD & 2 DVD edition).

The album came out originally in the '90s and went so out-of-print that copies were selling for a minor fortune on E-Bay. Mike was never happy with the original mix and jumped at the chance to re-do that for this Special Edition set. We get the original album remixed, extra unreleased cuts of real merit, excellent live video footage of the band at a number of club dates, studio tracking videos and more.

The songs are compositionally very together, in a post-Zappa way, from oddball pop-rock to fuzoid spectaculars and haunting melodics. Mike has his own way on piano and keys and we get to hear that directly. And as a guitarist, well damn is all I can say. There is the influence of later Zappa and Vai, and a scorching metal tone that screams, sighs and rumbles its way into your soul. His vocals are cool, too.

These are monumental progressive rock cuts and they simply blow me away. The new edition gives you a wealth of things to absorb. If you are a guitarist or an appreciator of seriously put together advanced rock, or both, this one will kick you in the butt big-time. Get it!