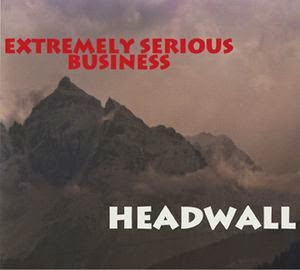 ESP Disk has never been known for fusion and contemporary mainstream jazz, yet that is what they offer us with the group Extremely Serious Business and their album Headwall (ESP 5005). It is the vehicle for the strong electric guitar styling of John D. Thomas, who also writes the original numbers, five in all with two standards reworked as refreshing breaks from the routine.

Thomas plays an electric guitar and also a guitar played through a guitar synthesizer. I generally prefer his sound on the untransformed instrument, but the switch gives us two different voices so we get a variety of worlds there. He is a craftsman of the contemporary rapid-fire line, which he gives us nicely with good ideas and a sort of post-Trane expanded chromatic tonality. Occasionally the lines lag just a tad, so that one wishes the tempo might be slightly slower or another take made. This is minor compared with the total effect of his playing, which gets your ears attuned and excites with its arching dynamic.

The band is a together quartet of Greg Burke on piano, Paul Beaudry acoustic bass, and Tom Garner, drums, good players all. Silver's "Song for My Father" features John on guitar, keys and electric bass with Garner on drums and it works well. There is as a concluding work a guitar duet with Avi Rothbard on "Yesterdays," and that comes out nicely, too.

The band, the originals and Thomas's artistry make for good listening. The fusion is rooted in hard bop and after more than it is rock oriented. And that is fine because there is sincerity, talent, commitment and some twists and turns that bring it all home.

Posted by Grego Applegate Edwards at 6:01 AM