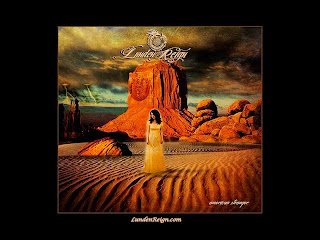 To say that you like or love something "in spite of yourself" is mostly to say that whoever you are doesn't necessarily fit with the attraction to something. In the case of the band project Lunden Reign and their album American Stranger (self released) I can't say that I find it good in spite of myself. I have always appreciated a good rock album and this one qualifies. That it has the presence of a real band with a real lead guitarist (Lora G) and a vocalist who projects forward very well without the slightest need for digital pitch-correction (Nikki Lunden), that it has a real bass player, a real drummer and they do songs that may have a possibility of airplay but hold their own as songs well-written (Nikki and Lora along with producer Luis Maldonado), well then it isn't really in spite of myself, is it?

The feel of the music is not as backward looking as it is contemporary, and I suppose for us older folks that takes a little to get used to. It doesn't have that contemporary vapidity that the worst of pop today seems to have sunk into. But that becomes ever more clear as you listen a few times.

It's a band and an album that ultimately appeals to me because it shows you that rock can live on and thrive when things are right. Lunden Reign makes things right!

So if you want to get a sense what is happening today rock-wise, here is one place to find out.