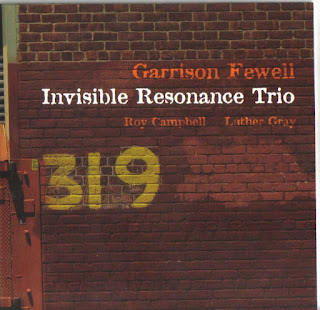 Life as you go through it gives you at times a kind of shock, as the cycles of birth and death realize themselves directly to you. I have lost some dear friends and we all have lost some important musical voices in the last year or so. Today's music commemorates the life and music of two of them, Roy Campbell and Garrison Fewell. I did not know Roy but have appreciated for a long time his musical gifts and have experienced the true anguish of his passing in the New York jazz community. Garrison I similarly have embraced as a musical force of importance, and got to know his kindly, saintly self in his last year or so on this earth.

Now they are both gone. But the music lives on in the form of recordings, happily. Garrison Fewell's Invisible Resonance Trio (Creative Nation Music 027) is something Garrison was working to get out in the last months of his illness. We are surely the better for it, though it was with a bitter-sweet sadness that I received this CD in the mail. It is a late 2013 recording of Garrison on electric guitar, Roy on trumpet and flute, and Luther Gray (who remains with us, thankfully) on drums and percussion.

It captured an inspired moment of the three together in excellent form. Free and freewheeling is the set. Free jazz it is if we must attach a name to it. It was the last time the three played together, happily in a studio setting.

There is great creativity and an electricity in the air to be heard palpably on all of this. So much so that I almost feel a certain reluctance to try and put my impressions of it into words. To make words take the place of the music is no doubt something of a violation when the music dwells on such a high plane as this music does. Yet my job as I see it is to describe as best I can with the aim of generating interest and appreciation.

So I will say that each plays a distinct role in the music that results. They listen and proceed, complementing the statements of each without stepping on what each the other is doing. Their high level of interaction is such that each leaves a space for the others so that a fully three-way synchronicity blossoms forth. And that result has, as Garrison would surely affirm, a kind of spiritual dimension, a striving outward from self to create another three-way musical being that is the trio here.

Garrison plays his own kind of guitar on these improvisations, neither predictable nor inevitable. Roy on trumpet and flute does the same in his own special way. And Luther contributes an ideal percussive being that builds a sonic arch to the others, acting not always as a "drummer" in the obvious sense as much as a third, melodic-textural voice.

The results are moving, a testament to deep listening and deep responding, a kind of memorial for those who have left us and a rejoiner for us all, to keep going, to keep on the path as they surely did when they lived.

A sad goodbye to Roy and Garrison, but a reaffirming hello to Luther and to us all. This is music that will ever speak. Hear the voices. Heed the wordless message!

Posted by Grego Applegate Edwards at 7:20 AM