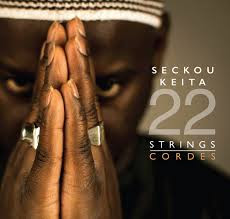 There is a West African legend, an oral history about the origins of the kora, a many-stringed harp with a highly developed instrumental practice centered around it. According to the story, back many centuries ago the spirits of the savannah constructed the first kora and gave it to the griot Jali Mady Wuleng, who mastered it and gained renown. The original instrument had 22 strings, so the story goes. When Wuleng died his fellow griots took up the instrument but removed one string in his memory. And so the instrument thenceforth was standardized with its 21 strings. But the 22-stringed kora tradition lived on in its place of origin, southern Senegal and northern Guinea.

Seckou Keita is a living master of this, the 22-string kora. He is a griot in an illustrious line of professional traditional musicians of southern Senegal and the heir to the 22-string kora tradition. The CD 22 Strings (ARC EUCD2585) gives us a full program of his solo playing, at times enhanced by his ornate and very musical vocals.

The kora music tradition of West Africa is highly developed, as anyone familiar with it will attest. The best players rival in technique and artistry some of the finest instrumentalists in the world. Seckou Keita exemplifies that tradition. He is a master among masters. The ten pieces on the album are mostly compositions of his own making; a few are traditional. His playing shows the highly evolved, ornate style to perfection. The tradition often calls for the counterpoint of an ostinato pattern and a ornate solo style in the second line, and when called for a third vocal line added atop all that.

Seckou Keita has fully absorbed that tradition and gives us some of the most involved solo work of any contemporary master. At times there is less of the ostinato and more in an expressive fanfare-like virtuosity. Other times he locks into a strong riffing groove and uses the entire range of the instrument to express all that he feels.

It is an extremely well-recorded album that showcases his mastery in great depth and with a fullness that puts him at the forefront of world virtuosity. But make no mistake, this is African music to the core, with a rhythmic and melodic vitality that has deep roots yet also shoots highly upward with a fully branched trunk of great beauty, so to speak.

It is a very stunning album that must be heard by anyone with ears to hear it. All those who appreciate great string playing will fall under its spell. It is absolutely stunning! Seckou Keita should not be missed!

Posted by Grego Applegate Edwards at 5:13 AM