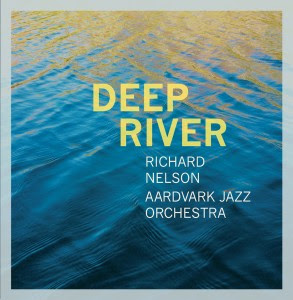 Forget for a moment about the "great American songbook." There is also the "great American folksong book," classic songs documented especially in the beginnings of the advent of recording equipment by various personages and sometimes record labels, artist-products of rural America mostly, by Afro-Americans especially but of course Caucasians from the sticks, too.

Guitarist-composer-arranger Richard Nelson was so inspired by his son Dan's exploration of the classic archival recordings of the old folk gems that he decided to put together a suite of six big band pieces based on some of the songs and/or otherwise strongly influenced by them. As a longtime member of the now somewhat legendary New England outfit Aardvark Jazz Orchestra with the equally legendary Mark Harvey at the helm, he had a ready and totally appropriate ensemble to perform his music. So he set about it.

The results are at hand, on the recording Deep River (Heliotrope 1012). The Aardvark Jazz Orchestra consists of Nelson and 14 other very together players at this juncture, plus for this music the vocalists Marcia Gallagher and Timothy Johnson, with Mark Harvey conducting.

It is some pretty wildly modern-voiced charts played with excellent spirit by the ensemble. Somehow the modernisms on generous display mesh completely with the rooted folk melodies. You will doubtless recognize "Deep River Blues" and "Make Me A Pallet on Your Floor." You may pick up with some of the other roots references, too. This is all about making fine modern jazz out of it all, with the vocalists referencing the melodies but not attempting to capture the nearly lost vocal styles in great detail. That's not the point.

What does happen is music that shows a fine sense of big-band orchestration and great thrust alternating with deft handling of instrumental groupings in the spotlight and solo-ensemble combinations. This is not meant to showcase Richard Nelson's guitar, though he does turn in some very good playing.

It's the composed-arranged whole and the excellently fine-tuned and moving performances that in the end make a believer out of you. Nelson clearly knows what he is after and the Aardvark Orchestra gives it to him with great strength.

This may be in the unexpected category. A few listens will I hope get you appreciating how it all works together. I am happy to have it to hear again. It is something! Very recommended.