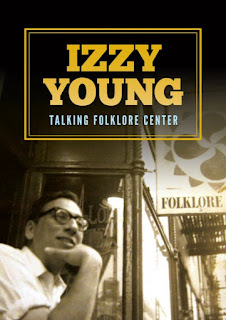 Izzy Young, folk enthusiast and promoter of the Greenwich Village folk scene during its height in the early 1960s, is a near legendary character in New York musical history, perhaps best known for his championing of a young Bob Dylan in the first stages of his career, but also for his Folklore Center on MacDougal Street, a place to meet, hear music, buy records or folk music books, sheet music and periodicals, hang out and meet up with central figures on the scene.

We get a kind of retrospective of it all on the 1986 documentary Talking Folklore Center (MVD Visual 52150), a Jim Downing film recently made available on DVD.

The idea is that Izzy, who fled the NY scene in the early seventies to set up shop in Scandinavia, returns to his old haunts in the Village in 1986, discovering the remains of the Bohemian world he was a key part of, meeting up with Art d'Lugoff of Village Gate fame, hosting a live folk show on WBAI, and re-establishing contact with artists like Allen Ginsberg, Pete Seeger, Tuli Kupferberg and Ed Sanders (of the Fugs), talking with them and hearing them recite poetry and sing songs.

What's perhaps most striking about it all is the shift in time from the early '60s, 1986, and the present day. By '86 there is a palpable decline in the Village as a center of creativity and activity; today, we of course realize all-too-readily, there is near extinction.

The changing economy of real estate, the neo-con surgence, the ever-mutating world and the decline in appreciation of folk and activist forms of local art, all are too readily apparent, of course to Izzy then as well as to us all now. A further sense of loss comes our way in touching moments as he returns to the physical locales, the empty site of the Folklore Center and other Village institutions and their spiraling rents that make continuing local scenes all but impossible, and even a visit to the Jewish neighborhoods Izzy grew up in, accompanied by reunions with his mother and his brother, the latter continuing the bakery business his dad had established.

You feel the movement of time, identity and the fragility of any creative scene in the great metropolis. And you appreciate the dedication of people like Izzy to make possible and centralize a landmark cultural movement now for the moment very much no longer with us.

A good absorbing slab of musical-cultural history! Anyone interested in the folk-beat movement in New York will find it a fascinating film.

Labels: documentary on the history of folk music in new york, izzy young talking folklore center documentary dvd gapplegate guitar review, music and the village in ny in the '60s