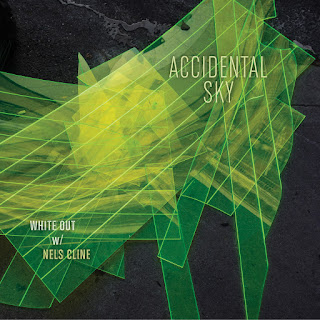 White Out and guitarist Nels Cline belong together. They fit together like hand-in-glove. Nels comes through with effects-laden avant guitar tone and noise to make a most effective sonance with Lin Culbertson on analogue synths, autoharp, voice and other electric elements, Tom Surgal on drums and other assundries.

There is a series of singular soundscape trips awaiting you on their latest album Accidental Sky (Northern Spy 066).

Nels is these days the lead guitarist with Wilco, but of course he has also been an important guitarist in outside, progressive jazz realms and it is here that he returns to more frankly avant modes. With White Out and the music on this album, it is never a matter of, "Wow, listen to what Nels is doing on guitar!" At least not at first listen. He is part of a virtual orchestral matrix, a blend of noise and tone, a cosmic set of adventures that have the totality of sound in mind much of the time.

What matters is not the mere existence of totality as much as the complexity and musical merits of the seven chapters of sonic poetry that makeup the album. Most of the time where synths (and modified percussion) leave off and guitar begins is never always entirely obvious unless you listen closely at some length. And that is a tribute to both Nel's and White Out's virtuoso mastery of altered sound and the sort of chemistry the three create and sustain throughout.

It is music that goes its way unassumingly, without pretense or showful assertion. It is not for all that slight or casual. It is very earnest and ambitious in its creation of ever-moving sculptures of sound combinations. And in the end it succeeds rather thoroughly in coaxing us out of our habitual listening stance, or protective attitudinal shells, disarming us and sending us propelling outwards into new territories.

It is at times pretty massive for a trio. It is at all times provocative and impactful.

I'd say, "a triumph," because it is in its own way. But aside from all the review type hyperbole you might read these days it takes an important place among today's best instrumental-electronics ensembles. So, yeah, call it a triumph if you like. Call it whatever you want. But more importantly, listen to this music closely!

Posted by Grego Applegate Edwards at 9:12 AM