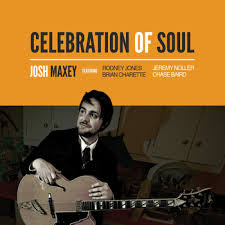 Some albums surprise you by being more than one thing. Josh Maxey, good guitarist and bandleader, gives you that on Celebration of Soul (Miles High 8634). It's an album of hip sounds that might suggest the William's Lifetime with Larry Young and John McLaughlin, or more with Ted Dunbar, but it is perhaps a little more grits-and-gravy meets streamlined interplanetary travel, too, than Williams' classic "Ego" was.

Josh plays the electric guitar well. He is joined by the equally lucid and very hip Brian Charette on organ, Chase Baird on saxophones in a very contemporary mode, plus Jeremy Noller on drums in a post-Tony drivenness, and Rodney Jones on second guitar for several cuts. Additional guitarists David and Brett Parnell (the latter on lap steel) and Michael Cioffero thicken the lines on some of the numbers.

The compositions are by Josh and they have a staying kind of constancy. His solo work is quite good, too.

It's music that comes through with excitement and yes, a soulful expressivity. I am sometimes reminded a little of later Charles Earland, too, in very good ways.

I like this one very much, foremost for the musical totality it gives you!