Michael Gregory Jackson, After Before 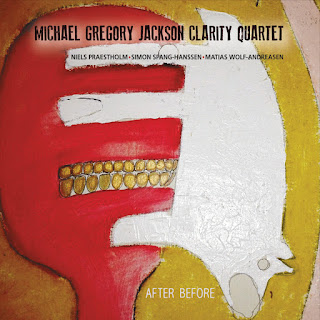 A new Michael Gregory Jackson album always promises to be an event. After Before (self-released) is no exception. His highly original guitar wielding is given an excellent setting with the current members of his Clarity Quartet: Niels Praestholm, bass, Simon Spang-Hanssen, tenor and soprano sax, and Matias Wolf-Andreasen, drums.

There is cohesion and spirited togetherness in this band. They run through some extraordinarily worthwhile original compositions, including a couple of those inimitable songs Michael writes and sings, existing in a lyrical place all their own.

But there is of course a new jazz contemporary thing happening with the band as well, as you expect from Michael.

There is nothing derivative about Michael's playing. He has always been a school of one and he continues to be, though there is never a standing still. There is a funky kind of leverage to his soloing on this one, along with a scatter overall fullness when he feels that.

The band is very simpatico, each in his own way a voice of distinction. Together they make very beautiful music.

Michael Gregory Jackson, if you need to know, occupies a space in the jazz guitar world that is wholly original and extraordinarily schooled in its steady-state singularity. After Before is a new step along the way, deserving to be numbered among his very best albums, in ways that hang together as "new," very much new.

Posted by Grego Applegate Edwards at 6:30 AM