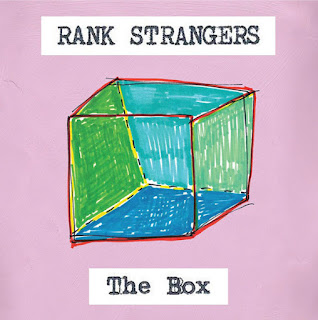 Minneapolis-based alt rock band Rank Strangers celebrates its 25th anniversary with a trilogy of albums. I covered volume 2, Ringtones, about a month ago here (see index). I will cover volume 1 in a little bit, but today I cover the final volume 3, The Box (self-released LP). Mike Wisti is the founding member, plays guitar and sings; David Odengaard sings and plays bass; and Shawn Davis is on drums.

This is disarmingly unpretentious DIY alt that keeps up a spontaneous immediacy even after 25 years. It has a raw but memorable quality. The songs have attitude in a whimsical way and musically this is substantial. Every so often Mike lets out with a skronky little gem moment on guitar, but this is primarily band-song-oriented.

The Box continues where Ringtones leaves off. A few songs have more than one version if you take the trilogy as a whole, but they are different enough that they are worthwhile. The lyrics are worth paying attention to for they have a quirky poetic quality.

OK, so this is one alt band that appeals to me and retains that experimental basement inventiveness that made alternative and punk-garage rock interesting in the first place. Yet this has a song orientation not especially simplistic so there is plenty to sink your teeth into.