Slivovitz, All You Can Eat 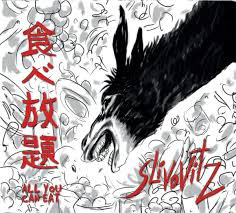 There is more than one way to skin a cat. Yet if this blog was about skinning cats, I would have run out of things to say long ago. Music gives you nearly infinite possibilities to get somewhere, far more than a cat skinning does.

So for example we have the new album by Slivovitz, All You Can Eat (MoonJune 074). It's their fourth, the third for MoonJune. And it is perhaps their best yet. The Naples-based aggregate comes up with a set of fusionoid rock that holds its own and breaks through to a hip originality. This is a band who has huddled together, forged ahead and gone into the studio for the first time in four years. And what comes out is fully formed, compositionally righteous and instrumentally inspiration-soaked.

It's a group effort in the best sense, with a sort of post-Zappa compositional core, a rhythm team strength in Vincenzo Lamaga (bass) and Salvatore Rainone (drums), some great electric and acoustic guitar from Marcello Giannini, ditto from the violin of Riccardo Villari, a nice horn team of Pietro Santangelo on tenor and alto plus Ciro Riccardi on trumpet. And then the harmonica voicings of Derek di Perri, a chromatic virtuoso.

This is fusion-prog with all the care and inspiration that you rightfully demand and they righteously deliver. There is so much music here, dense and prolific, that it is not something you'll tire of but instead will get more and more out of the more you listen. All You Can Eat is what it suggests, a super-abundance of musical courses that reward you for as close a listen, as ravenous a "feeding" so to speak, as you care to give.

Pretty astounding band, no doubt, and they are on a rampage in the best ways here!