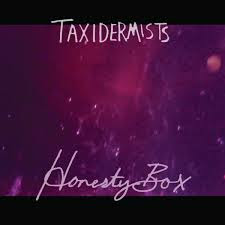 Something new in the advanced alt-rock arena today: Taxidermists and their album Honesty Box (Telegraph Harp 008, all formats). It's a duo of Cooper Handy on vocals and electric guitar and Salvadore McNamara on drums, 21-year-olds who have been playing together since 2007, Western Massachusetts residents appearing here on their fourth album, the first recorded in a studio and the first to get wide distribution.

The music is in song-form. It has an alt edge. But what stands out is the inventive asymmetry of the dynamics, chordal sequence, and guitar presence, not so much virtuoso oriented but with a sort of quirkiness that does not suggest the Beefheart guitar way as it does parallel it, not really Beefheartian, not the early Kinks, not Syd Barrett, but something akin and related, only strongly alt-slacker in orientation.

I have listened and the more I hear the more this music stands out as a definite ART. It's probably too advanced and peculiarly underground to appeal to mainstream rockers, though they would most certainly gain much from repeated hearings.

It's not quite like anything, but so consistently so as to really stand out. Unexpected progressions, guitar parts, alternating quiet lyricism and loud metal powering, drumming that fits the contours of the songs perfectly and dramatically...

This is very, way cool. Do I need to say more?

Posted by Grego Applegate Edwards at 6:31 AM