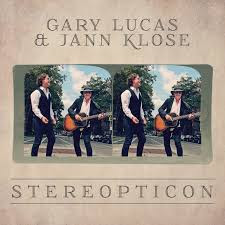 You never know what's coming next until you get to the future. And even then you wonder about the next future. Sometimes that is a very good thing. Certainly that is true of guitar wizard and conceptualist Gary Lucas and his multiple adventures/projects. It turns out it is true also of singer-songwriter Jann Klose. They have collaborated most rewardingly and the first fruits can be appreciated on their recent album Stereopticon (Cosmic Trigger/The Orchard).

One who knows may think almost automatically of Gary's legendary collaborations with the late Jeff Buckley. Other than the guitar-song intersections being equally creative it is probably best to put that aside for the moment. Gary sticks with his trusty old Gibson and gives us his patented, wonderful picking-claw-hammering-strumming best here. Jann has a modern, youthful sound that is not really Buckleyian, nor should we expect it to be. He sings well and directly and his part in the song collaboration is more in line with the rock-song stylings of the present.

Now that should not put you off in the least, because there are a bunch of great songs (some co-written with co-producer Dan Beck), some great singing and of course lots of Gary in a fine fettle on guitar. I would think that Lucas fans will be well satisfied with this album as I am, and Klose fans should feel the same way. Beyond that Venn diagram of intersections there will be an audience that may not know either artist well or perhaps not at all. The music should get their attention, those who look to furnish their life with great songs, great singing and great guitar playing. That huge mass of potential fans have much to attract them on Stereopticon.

It's the sort of music that gets your attention straight off but then when you go back and listen again and again it continues to grab you and sound fresh.

So my guitar-oriented readers will be happy with this one as I am. And there will, I hope, be many others. It has a joyous sorrow about it. And a kind of universal appeal. So get it!