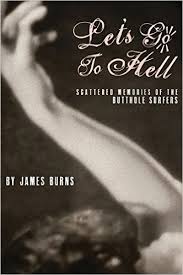 "So you wanna be a rock and roll star?" asks the Byrds in a notable song from the mid-late sixties. Their prescription for success is comically simple, a lyric that pokes fun at the whole enterprise as it extols its own status. Things are far more complicated than that. And perhaps no more complicated than in the heady days of punk-and-after in the music of the '80s-'90s, and perhaps epitomized in the harrowing adventures of an off-center band that became a legend and then was in effect swallowed up by its own success. I speak of the Butthole Surfers, a band that somewhat disqualified themselves for easy fame by virtue of their very name, and in the process of their long rise (and fall) endured and thrived by talent, determination and, yes, a kind of excess, even a depravity.

The new book devoted to that narrative of the band, Let's Go to Hell by James Burns (Cheap Drugs, 495 pages, paper or casebound), gives you an enthralling, detailed look at the band's career.

It is a well-documented piecing together of what the band's anti-marketing-marketing stance made a point of obscuring--the actual ins and outs of the trajectory of a band living for a decade on the very edge of collapse, touring continually in circumstances of dire poverty and deprivation, living solely for the music, yet also in their dire excesses living on the brink of physical and mental collapse.

It is a harrowing yet at times funny story of a band seemingly totally out of control both on stage and off, yet evolving into one of the era's very best post-punk alternative rock outfits. The story begins in the early '80s, as they are an upcoming punk outfit, details how they manage to outlive the punk era to become one of the rock underground's boldest avant rock guitar bands, evolving into a neo-psychedelic extreme-noise juggernaut, a premiere guitar band who mostly resisted the synth-pop era and kept the music evolving and on the edge.

Perhaps the extreme irony of the scene is enacted by the Butthole Surfers as with so many other bands of that era. The rise of Nirvana and grunge gave bands like the Surfers a mainstream popularity that through a major record deal and increased exposure created their presence on the national-international scene yet set the scene for their self-and-outward destruction. Success gave them for a time improved economic prospects yet alienated their original audience and put more and more pressure on them to retain a commercial success that belied what made them so interesting to the underground scene-mavens in the first place.

The book grabs you from the beginning and gives you an inside look of what it was like to be in the band. It will appeal to Butthole fans as a comprehensive chronology of lineups, tours, recordings, style changes and creative circumstances. But even if you are not a huge Surfers devotee it is a fascinating read and an important document about the socio-cultural and economic history of underground rock in perhaps its very peak period. The cultural wars between conservative factions and the underground is an underlying theme of great interest to anyone interested in the period, too.

Highly recommended. But be prepared for the hell of what it was like to be on the fringes then!


Posted by Grego Applegate Edwards at 7:05 AM