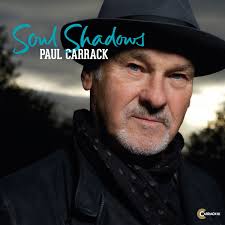 I am of the age where the music of Paul Carrack carries lots of connotations, half-memories of an age spent listening to the radio and hearing the classic soul hits we now realize were only there for a time as an active musical entity. Or were they? What is special about Paul's album Soul Shadows (Carrack-UK 026) is that he spins a full album of songs that in their make-up and their arrangements recapture un-selfconsciously that classic era. The songs are new, the arrangements are perfect, Paul sings very well and plays guitar that is more a rhythm than a lead item here, but no matter.

To say it is what it is is to say nothing, and not very precisely at that. But it is. This might have come out on Stax in 1968, say. But it didn't. Jimmy Ruffin? That and more. The songs are the thing and they are good. But then the vocals and arrangements carry it forward to make it real.

And so this music speaks to me, as it will to anybody who appreciates that period of soul-pop that filled the ears of those of us who were there, but also can communicate of course to younger folks who can dig what it is putting down.

This one grew on me, little-by-little. It has an authenticity and commitment to a sound that sounds right, in a beautiful way. Enough said.


Posted by Grego Applegate Edwards at 6:06 AM