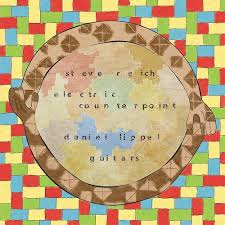 Steve Reich's Electric Counterpoint for multiple electric guitars is surely one of the landmark modern works of its kind. Pat Metheny did a version in 1987 that came out as part of an album that included "Different Trains." That was a beautiful take on it but now we have another excellent one, multi-tracked by Daniel Lippel (New Focus CD).

The piece as Reich conceived it was in part based on traditional Banda-Linda music of Central Africa. Lippel worked with NYU ethnomusicologist Martin Scherzinger to accentuate the African rootedness of the work. I must say the music sounds wonderfully well, perhaps the best it ever has in Daniel Lippel's hands. It is marvelously resounding and drivingly rhythmic.

I am a huge Reich enthusiast and so it did not take any arm-twisting to hear this version. It is exceedingly beautiful to begin with, and even more so in this extraordinarily well articulated version. Keep in mind that this is an EP with around 15 minutes of music. A better 15 minutes I cannot imagine, unless it were to be on some other planet!

All guitarists should hear this. Everyone else, too, while we are at it. Seminal.