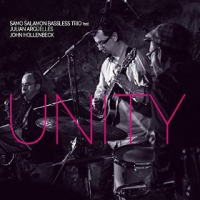 Today I am happy to report to you on Unity (Samo Records), the new album by the Samo Salamon Bassless Trio. It is a fine mix of three excellent players doing ten provocative and substantial Salamon compositions.

Samo is a guitarist of weight. He plays through the trio performances with composed and comped signposts that wear well on repeated hearings and solos with depth and musical originality. Julian Arguelles sounds great and advanced on tenor and soprano. John Hollenbeck is a drummer of palpable imagination and drive.

Together they make music that is beyond fusion but related to it. It is driving and has some of fusion's complexities but also has innovative structural ways. The trio covers unconventionally the compositional keystones of each number while opening up the improvisations in a free-wheeling way not entirely fusionesque. It tends to be less cranked than a more rock-saturated fusion group. Yet there is great torque nonetheless.

Every number jumps out at you with musical content and infectious forward motion. The trio can break into, say, tenor and drums in duet for example and/or with any number of group possibilities that can stray far beyond head-solos-head conventions.

Samo is a guitarist to listen to closely. He comes forward with well-conceived parts and beautiful solo work. And his compositions stand out strongly from the routine sorts of fusion formulas that one might hear on a typical date.