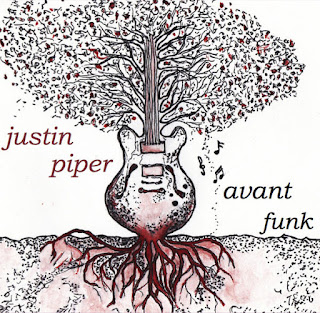 If you seek some nicely conceived electric guitar in a program of advanced rock-funk instrumentals, you can confidently turn to Justin Piper and his DIY album Avant Funk (Just One Music).

The idea was for Justin to map out arrangements of 12 pieces and then realize them well with Tom Garrington on drums and Justin multiple tracking on guitars, bass, electric piano and programming.

The compositional ideas, riffs, melodic figures, power-chord changes and such serve to set off Justin's very fertile guitar rocking and at the same time give you a set of originals that stand on their two feet in their own right.

It's subtle and worthy artistry that won't leave you incredulous, gasping for breath at the superhuman chops on display. Because it is about musicality more than technical prowess, though Justin can certainly play some fine rock guitar.

It's an album that when I put it on--say from the second time forward, it reminds me of itself rewardingly and subtly-straightforwardly. It's music without cliché, yet it is very contemporarily rock saturated.

Do you get me? A very worthwhile spin this one most definitely is. Justin has talent and his refusal to wear it on his sleeve is refreshing and all the more likeable. Listen!
Posted by Grego Applegate Edwards at 2:15 PM