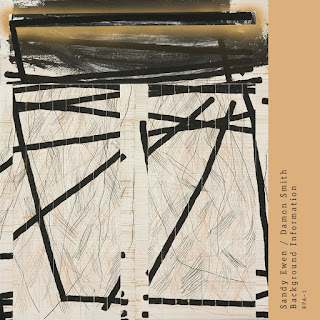 For today's offering we return to Balance Point Acoustics releases, Damon Smith's indie label of avant improv. Judging by the release number (BPA-1) this must be the first. (No, Damon just reminded me that the first was in fact his duet with Peter Kowald, recorded in 2002 and reviewed here.) This one is a most uncompromising duet between electric guitarist Sandy Ewen (and I've covered a good amount of her recordings lately. Type her name in the index for those.) and Damon Smith on upright bass, electric 7-string upright bass and field recordings. (I've been covering many of his recordings here as well. See index for them.)

All this on the album Background Information. Sandy Ewen comes through with all manner of prepared and extended sound worlds on her guitar, as we (or I anyway) have come to know via other recordings. She and Damon rethink their instruments to allow them to sing out in unorthodox ways throughout. The result is a pull-out-the-stops series of four improvisational segments that explore with care an evocative noise-timbre-color world of extra-musical sound.

It works! And it works mightily. Fascinatingly. Meditatively. Is it their best album(s)? Probably not precisely. But it does occupy convincingly interesting musical terrain and consistently so. It in its own way is a kind of primer for ways to get away from typical sounds on guitar and bass. Both are indefatigably original for this, so do not hesitate--order a copy.