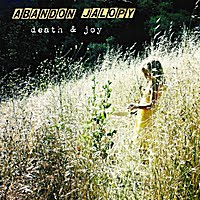 OK, we have Abandon Jalopy's second album today, Death & Joy (Studio Ear Bone). This is the name of the ongoing group project headed up by Blind Lemon's bassist, Brad Smith.

The album has some strong tunes, like for example "All the Way," which should find college station airtime. It's alt rock with a power pop veneer. Instrumentally it has a guitar-bass-keys-drums-vocals immediacy. It's about the songs, not much in terms of improvising, but that isn't the thing.

You listen and you get into it, generally speaking. The strong parts of the program get you liking it, but there are some songs that don't have quite as much going. They go by without pain or consternation and you get to another high point, so it all works out. Good effort and some definite winning moments.