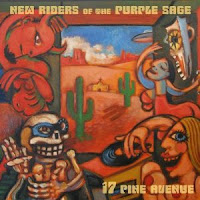 The New Riders of the Purple Sage started out, most will know, as a kind of country-flavored Dead offshoot, Jerry himself on pedal steel, with an ambiance that had something in common with the more countrified aspects of the Dead in those days.

They made a bunch of albums, garnered a following of their own and more and more became respected and liked for what they were actually doing as opposed to fame-by-association.

Well they are back. A new album came out this spring, 17 Pine Avenue (Woodstock 0037) and it should satisfy the country rock hippie still lurking inside you.

Not every song is a total gem. But the band is strong and tight, and many of the songs get right to it.