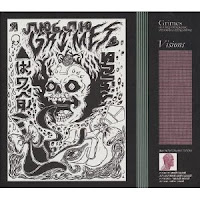 I had meant to review this one Friday, but a miscue in my logistical work flow forced me to postpone until today. We have Canadian performing artist-vocalist-instrumental-electronician Claire Boucher as Grimes, and her album Visions (4 AD).

My first reaction on hearing it was, "What is this?" Well, it's a kind of joyfully mindless yet cosmically spaced beats-ambiance-pop I guess. The female vocals have the slightest J-pop playfulness to them, but combine that with Bjork and you get what this is--deceptive pop with a bit of a kick.

The synth beats tracks are not cliche and the singsong vocals with heavy echo make you feel as if you are in a futuristic dream.

But it's mindless pop. But it isn't quite. So I like it, in spite of my potential aversion to something like this. It's musical. And a little bit out there in its own way. That's why I decided to mention it. I am glad to hear it. Seems like good summer driving to the beach sort of stuff, but spacey too.