Spokanarchy! Where Were You in '82? 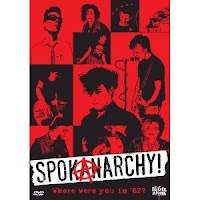 Punk. Where were you when it emerged? Some were in Spokane, Washington, a sort of one-horse center in those days, isolated and culturally a bit backward.

Spokanarchy (Carnage & Rouge) tells the story of the advent of punk in Spokane in a full-length documentary DVD that focuses on extensive, rather insightful interview footage interspersed with clips of the bands that made what impact they could in that town in the '80s.

The emphasis is on Spokane punk as a lifestyle, a protest against conformity, an anti-establishment expression that flowered, held steady and ultimately became a part of history in the teeth of exceptional hostility.

It wasn't so much about musicianship per se, as the interviews make pretty clear. It was a DIY artistic-social movement that attempted to rise out of the ashes of crushing boredom, teetered and turned for a time into a set of activities that were strongly determined, then fell apart gloriously like the mechanical toys of the '50s.

In the process you experience an excellent documentary that will keep you thinking about it all for years to come. It may not get you to go out and get the Sex Pistols box set if you haven't already. It might make you curious to explore the bands from Spokane from that era. But most importantly it will give you a feel for the punks of backwater America, their courage, their despair, their constructive-destructive mindset.

A must for students of the counter-culture and modern cultural history.

Posted by Grego Applegate Edwards at 5:45 AM