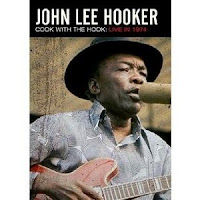 Here we have some real John Lee Hooker live at an outdoor rock fest of some sort in 1974--more specifically, held at a landfill in Gardner, Massachusetts. It was originally broadcast on local television, apparently, and has been mouldering in limbo until now. It has just been released as a DVD, Cook with the Hook (MVD Visual 5302D).

It's a 45 minute set recorded onto black and white videotape in a rough-and-ready fashion. The sound sometimes suffers a bit from mixing glitches and occasional balance issues, but it is overall quite decent considering.

John holds forth with a bit of his signature guitar. His band is quite serviceable and pretty typical of the period. It looks like John's son is on lead guitar and then there is a pretty solid rhythm section.

John runs through some of the big hits, "Serves You Right to Suffer," "Boom Boom," etc., and then launches into a very long boogie with vamps and John's vocal riding on top with a gospel-soul-blues exortation. This goes on mesmerizingly and no doubt was something the hippies could groove on. They generally do. After an encore of more boogie, it is all over. John fades back into history. But for 45 minutes he comes alive on videotape for us once again, the master that he was, and is.

Posted by Grego Applegate Edwards at 5:41 AM