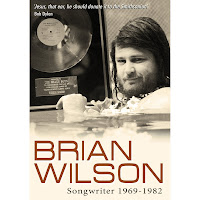 Brian Wilson is a complex character. He is not easily pigeonholed. Beach Boy leader, writer and producer of go-go teenage surf, sun, car and angst songs, art song composer-arranger of Pet Sounds and Smile, troubled soul...Brian Wilson: Songwriter 1969-82 (Sexy Intellectual SIDVD 574) documents the volatile period in Brian's career when after abandoning the album Smile uncompleted, Brian has a breakdown of sorts and draws within himself, then makes a series of comebacks and recording ventures with mixed success.

There are various forces at work, as the documentary shows rather clearly. Mike Love and the record label want more happy, breezy, early style hits and/or the endless re-presentation of past successes, the WIlson brothers are generally for broadening horizons and new creativity, and Brian himself bounces between the need to continue to innovate as an artist, total withdrawal and resigned moments where he reverts to old Beach Boy ways.

It's not an especially happy story in those years. He creates a few classic tracks that perhaps make up for it all but generally this is not his finest hour.

Nonetheless the documentary does a decent job juggling the various influences on his life and looks at his erratic output with critical honesty.

Recommended for all Brian Wilson fans.