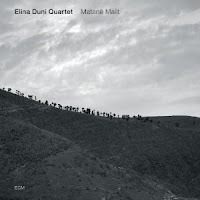 A number of years ago I had the good fortune of being assigned at Cadence a review article devoted to a CD release by the Albanian singer Elina Duni. Not many were familiar with her then but I certainly became enamored with her voice and her music, an intriguing reworking of traditional Albanian folk music combined with modern jazz.

So naturally I was pleased to find that she had just recorded her debut for ECM, Matane Malit. It plays on my computer as I write this.

First off I am happy to say that her music continues to grow. This new one is a furthering of the folk-jazz meld that she was involved with on the earlier recording.

Elina vocalizes here with a piano trio headed by long-time collaborator pianist Colin Vallon. The band is quite receptive to her re-arrangement of traditional songs and new music written in a similar style. The blend of Elina's beautiful, very nuanced vocal instrument with the trio is such that there is an unprecidented resonance between contemporary modal jazz and folk strain. It is music that manages to be quite striking.

Meters are sometime irregular, odd, as is characteristic of indigenous Eastern European music as a whole and the band makes good use of these platforms to leverage a good rhythmic feeling. But whatever the meter every song stands out as an outstanding vehicle for Elina's vocal subtlety and the hipness of the band's arrangements and feel.

This is music to warm the soul. You should most definitely hear it.

It so happens that Elina and band are touring the States just now, starting tomorrow. You can catch them at the following venues: