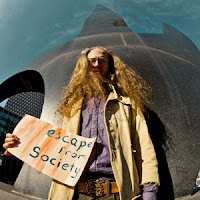 Sam Kulik did something weird. He advertised on Craiglist, inviting people to submit lyrics that he promised he would set to music for his upcoming album. He picked twelve, added two of his own, and got to work. The result is the otherwordly pop-rock-psych album Escape from Society (Hot Cup 113).

It's a pretty uncanny album of mental adventure, yet catchy. "More than Your Dog" is about somebody trying to find what (his partner?) loves more than her dog, for example.

The music is sung by Sam in a pleasant tenor voice that reminds me just a little of Rickie Nelson, though one would never picture Ozzie approving of these songs!

It sounds like it could have been a lost session of an underground would-be of 1968, a good one. The lyrics and ambiance give out that vibe.

It may not find its way onto top 40 radio (!) and of course that's the point. The lyrics ignore what a pop lyric is supposed to be and go their wayward ways. The music is full blown, well arranged pop-rock with a weird psychedelic slant, especially at the end.

It's great fun! Recommended if you want something very left-of-center.