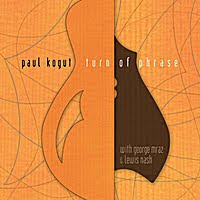 Turn of Phrase (Blujazz 3395) is what happens when you turn three stellar artists loose in the studio and they are in the mood to play. It's one of those situations where it hardly matters what, could be "Mary Had A Little Lamb" and it would still sound beautiful. Well of course it isn't that that they play. Instead it's a series of appropriate and nicely turned originals by guitarist Paul Kogut, which he, George Mraz (bass) and Lewis Nash (drums) sink their teeth into over a long and swinging set.

Kogut is a guitarist in the inventive currents of the mainstream. He doesn't especially sound like anybody. He winds genuinely creative improvisational lines that owe something to the past exemplifications of Wes Montgomery, Abercrombie, Hall, Metheny and such. This is only to say that he is in the tradition of changes-based guitar masters (with an occasional jolt of electricity thrown in) and he holds his own.

George Maraz and Lewis Nash need no introduction to Jazz savvy readers. Both are exceptional players and they sound terrific with Paul on these numbers.

In fact it all sounds rather terrific. This one will get you going.