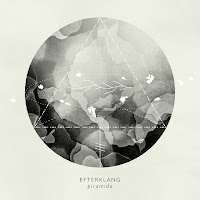 The latest Efterklang album Piramida (4AD) is both a fascinating concept album and a musical triumph of sorts. Essentially they went on a nine-day expedition a year ago last August to the island Spitsbergen, located near the North Pole. They explored the falling-to-ruin ghost town Piramida, which was rapidly abandoned in the '90s and now stands unoccupied.

This trip and the enigma of the ruin, through samples and general inspiration, form the concept around the album.

The music itself is a kind of alternative masterwork. It has the songs, synthetic or otherwise fullness of arrangement, and a haunting way about it. It is a lyrical joy and a definite innovation in the rock-post-prog world.

The music leaves me a bit speechless, so I don't have a lot to say about it right now. It has an elegant emptiness, a hollowed-out feeling of loss to it that reverberates with a world mood, or at least a personal one. It's pretty damned brilliant, I would say. But you listen and judge for yourself.