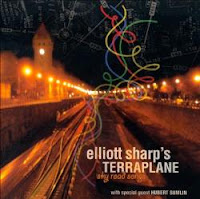 Terraplane is Elliott Sharp's blues-rock outfit. It goes way back but has been more active in recent years.

Their new one, Sky Road Songs (Yellowbird), makes an energetic foray deeper into the thicket of possibilities, with some soul-like numbers, some heavier than average blues rock, good guitar work from Elliott and a guest appearance by the late Hubert Sumlin who tragically left us not long ago.

There are very decent vocals by the likes of Tracie Morris and Eric Mingus, sometimes following a more-than-blues song format (soul/rock/out-rock) that should bring this record into the rock-soul radio airwaves orbit.

So it's more than just blues but like anything Elliott Sharp does it's ultra-solid music. And the bluesier old-meets-new kicks are a total post-Beefheartian blast.

For those around the New York City area this weekend, they will be playing a gig this Sunday (November 11th) at Joe's Pub, starting at 9:30 PM. Catch it for good sounds.

Posted by Grego Applegate Edwards at 8:31 AM