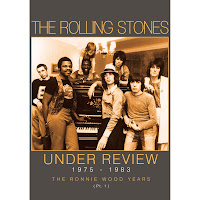 For those into Stones history, there's a new DVD out called The Rolling Stones Under Review, 1975-83, the Ronnie Wood Years (Pt. 1) (Sexy Intellectual SIDVD 575). As the title makes clear it takes a chronological look at the band, its personal interactions, musical output, and general fate in years that were decidedly mixed ones for the band, but perhaps also the last period that the Stones had a direct influence on the rock world through "hit records" and high-charting songs.

It is the time when guitarist Ronnie Wood came on board, they scored a disco hit that somehow managed to be more Stones than disco, and they had perhaps the final prototypical rock success with "Wind Me Up" and the album it came out of. At the same time Keith Richard was in a low ebb, with a major drug bust and a serious addiction problem, while Mick Jagger lived the opulent life style of a posh rock star in NYC.

Through rock critic commentary, footage and a cohesive narrative, the era is given 115 minutes and the full treatment. I found it interesting and worthwhile to experience the summing up of the era. It is rather well done. This is something more for Stone fans than a general audience, but I suspect you can gather that by the title. Still, it's a piece of rock history and there are insights on the aging of rock that any student of the music should appreciate.