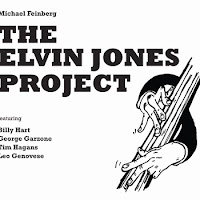 Anyone who has explored Elvin Jones's seminal presence on the modern jazz scene in some depth, live or in recorded form, eventually realizes that an important component of his sound, his groove, his structured sort of freedom, depends upon his interaction with key bassists. His way of taking it further depended on the bedrock of intuitive and perhaps explicit interactive roles that Elvin and the bass players developed in his groups over time.

Those who care about such things will hear the results in those terms, at least part of the time, because Feinberg and drumming master Billy Hart achieve something of that creative tension that Elvin and his bassists achieved. At the same time all lovers of modern jazz should appreciate what is going on in this set in a wider sense, for it is music of immediate impact.

Feinberg chose his musicians wisely for this project. Hart has the expanded swing feel that is certainly related to Elvin's on the set, but of course he is a master drummer in his own right. Tim Hagens on trumpet, George Garzone on tenor, and Leo Genovese on piano have their own take on the sort of music that Elvin and the Trane/post-Trane players have played with such creativity and conviction over the years. As an added plus, guitarist Alex Wintz fits in well on his two guest appearances.

Like the best of Elvin's outfits this is a group at doesn't just solo over rhythm, the soloing and rhythm-ing are intertwined in involved ways, ways that define the music. And everybody sounds at home and in very active sympathy with the music at hand. Feinberg shows himself a most excellent bassist, up there with some heavyweights and holding his own.

The song choices fit perfectly. There are a couple of Elvin gems, a Feinberg original, then Trane's "Miles Mode," some goodies by Jones sidemen Grossman and Foster and the Trane-Jones associated ballad "Nancy with the Laughing Face."

Of course the joy of this musical outing is countered by the recurring realization that Elvin is no longer with us. A great man, a great musician that changed everything....I'm sure he would have dug this record. Maybe he's somewhere up there digging it now.