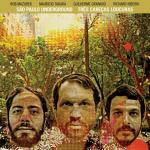 Sao Paulo Underground takes the fertile and endlessly productive Brazilian strains of samba and other indigenous outcroppings and combines them with modern electric jazz in some very new, creative ways. This you can hear to good effect on their latest, third album Tres Cabeças Loucuras (available as CD or LP)(Rune 325).

The group features cornet-composer extraordinaire Rob Mazurek, who has been doing some remarkable music in and around Chicago as well as around the world in various configurations (covered in these blogs), including his large ensemble Exploding Star Orchestra.

He teamed with Mauricio Takara, initially as a duet, to form the Sao Paulo Underground. The first recording was a duet (Takara is a very together drummer and percussionist, plays the cavaquinho, the small guitar often featured in Brazilian samba ensembles, and joins with Rob in giving the group sound colors from a battery of electronics). By now the band is more fully fleshed-out with the addition of Guilherme Granado (keyboards, electronics, samplers) and Richard Ribeiro (drums).

The third album is an unusual mix of rhythmic excitement, cornet-wielding goodness, hip tunes and neo-psychedelics. It's an excellent listen, modern and electric without a trace of cliche.