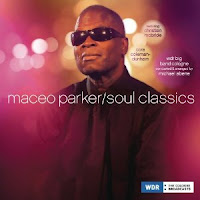 Funk. Funky. I am talking not of the Horace Silver gospelly thing that directed much jazz into a rootsy zone, but the thing James Brown had so much to do with creating, that still is very much with us, that in the right hands soars and rocks the house.

Saxophonist Maceo Parker was there in James Brown's band when it all started happening. He's been doing hip things on his own since then. If there are "right hands," Maceo surely is the right hands.

But he can not do it alone. His new live recording with the formidable WDR Big Band, Soul Classics (Razor & Tie), puts all that in place, then steps on it to put it in overdrive.

It's a collection of great old funk numbers by James, Stevie and such, and they kick it hard!

Some beautiful soul sax, hot soloists, a band on fire, nice arrangements, and the rhythm team pushing on it, with soulful vocals from Maceo himself. . . that's what this is all about. It cooks! If you've become a little blase with the funk thing, this will revive you, I am telling you true.

You'll get good and cranked with this one, trust me.