Kid Creole and the Coconuts, Live at Rockpalast 1982, DVD Set 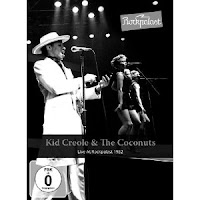 Funk. Funk. Funk. We took a look in the last two days at two different funk outfits going at it. Today a third possibility: the Afro-Carib-New-Wave-Funk of Kid Creole and the Coconuts, Live at Rockpalast 1982 (MIG 9052). It's a two-DVD set of the band live on the West German TV show-concert in two long sets from June and October 1982. The two DVD set is reasonably priced and gives you lots of music plus an interview with the front liners of the group.

This is a band that benefits greatly from the DVD presence, as they have a vibrant visual impact as well as some strong performances throughout.

It's a band that was pretty big back then, of course. They combined Latin-Carib elements with a kind of New Wave funk that Talking Heads and the B-52s were doing at the time. This is a tight, smokingly large band with lots of percussion, horns, a great guitar-bass-keys-drums underpinning, and the visual-vocal impact of the lovely Coconuts vocal trio, vibist-vocalist Coati Mundi and guitarist-vocalist Kid Creole.

It's some kicking music, fun and rocking out. You might expect any minute that they would break into "YMCA" but thankfully they never do and at the core they were much, much hipper than that. Check it out if you like. I think you'll enjoy!