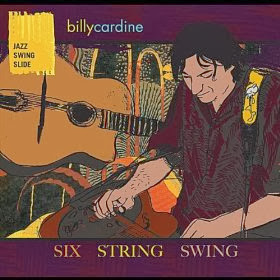 One of the beautiful things about doing these reviews is how you get to know the music of some great cats you would not otherwise know about. Today's example is one of those happenstances. Slide guitarist extraordinaire Billy Cardine sent me a short clip of him playing with a somewhat self-effacing "maybe this is the sort of thing you would like to cover in your blogs?" I listened for about 30 seconds and I thought, "holy living cow! This guy is terrific!" or something to that effect.

End result: Billy sent me three CDs of his music, each a killer! Today we devote to his Django-Gypsy Swing set, Six String Swing (Little King). It's Billy Cardine on slide guitar with a string band of players including mandolin, some of whom do some very nice soloing here. But it's Billy who completely blows you away.

I surely have never heard a slide guitarist with such abilities--he manages to get Django's essence across while showing you the sort of artist he (Billy) is: tasteful, technically incredible and musically profound.

I'll be covering in a short while the other two albums Billy sent--and each is very different--so I wont go into all the details of his playing here. Instead, I'll just say that this album floors me. It has everything going for it. It manages to catch the Gypsy Swing style and take it to slide heaven. Do not hesitate! Get this one!

Posted by Grego Applegate Edwards at 7:32 AM