The Avengers, On A Mission 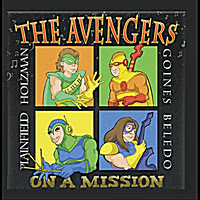 Beledo is a Uruguyan guitarist of both power and finesse. He and his jazz-rocking outfit The Avengers carry on in fine fashion in the CD release On A Mission (Gudari). The music is in the elaborate modern fusion mode and Beledo is well served by the keys (Adam Holzman), bass (Lincoln Goines) and drums (Kim Plainfield) lineup that comprises the band.

Beledo wrote all the tunes save one (by Marcus Miller), and they are nicely crafted and as note-y as typical of this style today.

Beledo has been solidly influenced by Allan Holdsworth in his group concept and personal sound. But within those confines he excels. He can dazzle you with a blur of notes, then dig in with the sheer sensual properties of his guitar sound. He and Holzman, understandably, are the principal soloists and they work well together, complementing and returning thought with counter-musical thought.

One gets the feeling that this band is working towards its very own way and sound. There is enough there already to suggest it. I look forward to that evolution in sides to come. Meanwhile this one satisfies. Beledo is a true artist of the guitar!