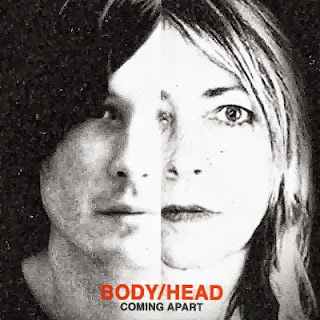 Now that Sonic Youth is no more (for now, anyway) we have the proliferation of albums by ex-Sonics that carry on. The latest is by Kim Gordon and her friend Bill Nace, a duo known as Body/Head. Their album Coming Apart (Matador) has just been released, and it's an adventure.

The Sonics sometimes had their weirder moments when Kim might go into outside vocalisms while guitars fed back and skronked out. Coming Apart is a full album extension of such things, Kim sounding like a cross between Patty Waters and a female Lou Reed at his more bizarre, only it's Kim Gordon and so instantly recognizable as such.

Bill and Kim man the guitars, Kim the vocals. It's like Sonics/Velvets at their weirdest, and carves out further that territory in its very own way. The guitar playing is psychedelic outness that has its definite charms, provided you open your ears and take in the out abstract-artiness of it all. And Kim is her irreducible self as the vocalist-performance artist. Not always on key, purposefully, but always artistically expressive.

I like it. You might hate it. But not if you like the outside realms of the Sonics in their heyday. It takes things from there. Don't expect to hear any of this on top-40 radio!