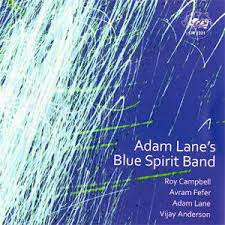 Adam Lane isn't only a superb bassist. That should be enough. But he is also a leader of real strength. You get that today with his album Adam Lane's Blue Spirit Band (Cadence Jazz 1231) which was waxed in 2009 but released last year. The mood is elated, exuberent, and the repertoire is the roots, blues, spirituals, folk songs. That doesn't mean he's "gone traditional" any more than the Art Ensemble did on Message to Our Folks. It means that respect for the past combines with what playing cutting-edge jazz is to these artists.

When I first listened to this one and then put it in sequence for later listens and review, Roy Campbell was still with us and we had no idea, no warning that he was going to leave us. But he did, suddenly, shockingly, gone. But here he is on this record, blazing fire, sounding excellent, a trumpet at the top of today, now a memory. So RIP Roy Campbell. This is as good a place as any to hear his last flowering.

And then the rest of the band is at the top, too. Avram Fefer on tenor, volcanic and impassioned. Vijay Anderson turns in a very together performance on the drums, as you can count on. Adam plays bass like you know he can. And the arrangements turn these old hoary classics into the now of today.

"House of the Rising Sun"? Yeah, and "Peace Like A River", "Old Time Religion" and a bunch of others, done with all the heat and tensile strength of the music today. There's another release on CIMP I'll be covering shortly. But get this one; pay respects to Roy Campbell but do the same for all of these artists. Someday we'll all be gone and we need to appreciate the art while we--and they--are here. You'll be getting one hell of a nice recording too!