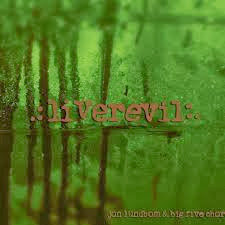 There is a group of young titans out there who intermingle in their different ensembles freely and make some great jazz music in the process. There is Mostly Other People Do the Killing, Bryan and the Haggards, and today's incarnation, Jon Lundbom & Big Five Chord. The recent 2-CD live set Liverevil (Hot Cup 131) has been out for a little while and it's something.

With Jon Lundbom on electric guitar at the front, we have a potent lineup of Jon Irabagon on alto and soprano saxes, Bryan Murray on tenor and balto! saxes, Moppa Elliot on acoustic bass, Dan Monaghan on drums, and special guest Matt Kanelos on keys.

The band really benefits from the longer cuts and a sympathetic audience, it seems to me. Everybody kicks in with committment. The solos from everyone are excellent. And the tunes are extremely hip, too! There is a little bit of humor with these guys and it's more than refreshing. Yet they are serious players. Serious!!

Jon Lundbom is a guitarist who takes it out in his very own way. There is a full press of note-fullness, a way of patterning in extended chromatic territory that is quite original, and a soulful delivery. In many ways he has arrived, but then so has this band.

Two slabs of excellence, two-CDs, two for your ear-growing exercises. This is the one to get first, I think! Then get the others...