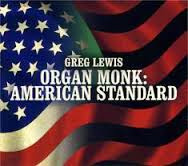 Greg Lewis, one of the very hippest jazz organists out there now. Organ Monk, his celebrated group gathered together to pay homage to Thelonious Monk not by imitation so much as by osmosis, by absorbing the essence of the master, doing the tunes & compositions he did in his performing life and making it new. That's what has been going on and it continues on Organ Monk: American Standard (self-released).

The idea is of course that Monk through his career played some standards along with his irreplaceable compositions. Greg Lewis has collated the best of them and set his band on re-doing them with hip arrangements and the same flare as they have given to Monk's music per se.

And guess what? It works. They kick up plenty of fuss and swing the hell of of the tunes. It's Greg on the B-3, of course, Ron Jackson on guitar, Riley Mullins on trumpet, Reggie Woods on tenor and Jeremy Bean Clemons on drums. Everybody can solo with bop and post-bop fire and they get it all smoking here.

Lulu is back in town! She's at a club digging Organ Monk. If you can't get to one to hear them then get this disk. Or do both. It's hitting that elated peak when everybody is on top of it all. Greg is Monk organist and more--and everybody does what a tribute should--not ape, cog-i-tate!

Posted by Grego Applegate Edwards at 7:38 AM