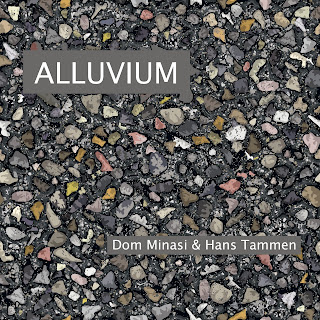 Dom Minasi you know, if you read this blog, anyway. Hans Tammen you may not. Both play guitar and can and do go into zones of adventure and freedom. The two met as a part of an eight-guitar ensemble, found that they had compatible conceptions musically, and made a point to get together as a duo and record. The result is this album, Alluvium (straw2gold pictures).

It has a focus on sound and grit. There are almost punk-ish, post-Beefheartian moments on this set of improvisations. Hans initially looked to Sonny Sharrock and Pete Cosey as influences. Some of that is in there in his playing, but much more of his own besides. Dom has influences in roots harmomelodism from Johnny Smith on, but then has taken things out in his very own ways, which can vary as widely as you could imagine, from pulsating, harmonically pinned fluorescence to sound-sculpting.

This is an album that shows a rare, vibrant species of chemistry between two guitarists. They travel the spaceways and they plant their feet firmly on earth as well, sometimes in a heartbeat.

This is what open improvisation is about. Between two truly inventive artists. No preconceptions except to live in the spontaneous creative moments of now! The listener must anticipate the unknown. Like going on those "mystery rides" my dad sometimes sprung on us kids when I was young. Where? You find out as you go. That's the excitement that this music puts forward. You don't ask, "when are we going to get there?" Because "there" starts, continues and ends with the duration of this set. Open up!

Posted by Grego Applegate Edwards at 7:52 AM