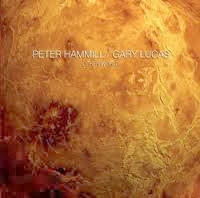 It makes perfect sense that Peter Hammill and Gary Lucas would collaborate together on a project. Both are purveyors of the rock art song, Gary especially with Jeff Buckley in that day but after that too; Peter with Van der Graaf Generator. They both have an affinity with spacy, psychedelically open worlds also--Peter in the sound Van der Graf gets at times and Gary as a one-man master of pedals and space with his Strat and array.

So they just released the (first?) fruits of their efforts and I am immersed in its other-earthly world with a good deal of pleasure.

Not surprisingly it is called Other World (Esoteric Antenna). It is a collection of rather riveting, quirky song-soundscapes created with nothing but Peter's vocals and Gary and Peter's guitars. Another world opens up that simultaneously points forward to new frontiers of space music as it recaps where both have been. To my mind music is like cinema. Genres are constants that transcend time. So space music is to our world as is sci-fi or horror films. No genre is exhausted when our prime creative artists put their mind to working within it. And so here.

There's a bit of the rootsy Gary, a corking good deal of the cosmic Gary and Peter, and the kind of intelligent peculiarity of Peter's songs combined with the structural hipness of Gary's song-melding, all wrapped up into a sequence of sounds that gets better every time you hear it. It is memorable in ways you might find unexpected, unless you know their previous music well. The scapes are some of the most symphonic ever, the songs some of the most quirky.

It's not time to go up to the attic and unpack the lava lamp. It's time to don that silver spacesuit and confront the future that has arrived.

The music needs genuine creative acuity to move forward. Peter and Gary have that in abundance here. Strongly recommended.